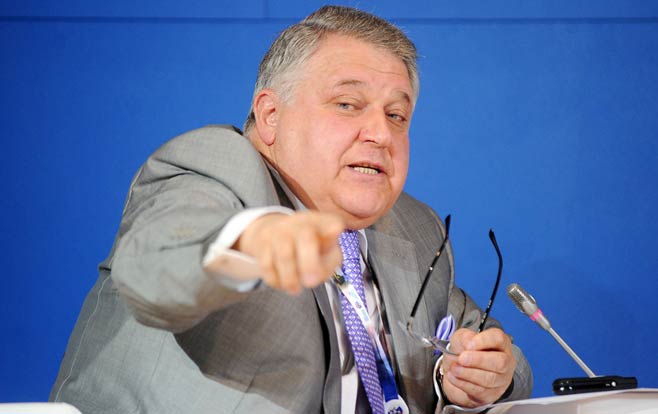 Four physicists have announced their resignation from the academic council of one of Russia’s top research institutes, accusing it of failing to defend a prominent colleague who was fired for «truancy» after attending a workshop at Stony Brook University in the U.S.

The dismissal of Alexander Gorsky from the Institute for Theoretical and Experimental Physics, or ITEP, in Moscow last week has outraged many of the country’s physicists, who described it as the latest government attempt to hinder their work.

Valery Rubakov, a full member of the Russian Academy of Sciences from the Institute of Nuclear Research, described the pretext for the dismissal as «absolute nonsense.»

«Scientists need to travel, that is normal academic life,» Rubakov said in a phone interview. «He was fired for a productive business trip. The case is egregious.»

As conditions for authorizing Gorsky’s trip to Stony Brook in New York, ITEP’s administration demanded a cooperation agreement between the two research centers, and security clearance for a talk that Gorsky planned to deliver about his paper that had been published in an international journal a year earlier.

When he refused to comply with what he called «illegal» and «absurd» demands and went anyway, he was fired for truancy, Gorsky said.

A group of ITEP physicists tried to convene the academic council on Thursday in an attempt to pressure the government-appointed officials who run their institute to overturn the dismissal, but the request was denied, said Mikhail Vysotsky, an associate member of the Academy of Sciences who took part in the attempt.

In response, Vysotsky and three others — theoretical physicist Viktor Novikov and experimentalists Roman Mizyuk and Tagir Aushev — have submitted a joint letter of resignation from the academic council, saying that it «fails to protect the interests of ITEP scientists,» according to a copy of the letter e-mailed to The Moscow Times.

Physicists at ITEP, one of Russia’s top five research institutes in international scientific citations, have been embroiled in a bitter struggle with its administration since the government moved the institute out of the state nuclear corporation Rosatom and into the newly created Kurchatov Institute Research Center several years ago.

The Kurchatov Center is headed by Mikhail Kovalchuk, whose younger brother Yury is the chairman and biggest shareholder of the Kremlin-linked Bank Rossiya. The U.S. slapped sanctions on the bank following Moscow’s annexation of Crimea last month, calling it a personal bank of the Russian political elite and its billionaire co-owner a «cashier» of Putin.

The official reason for ITEP’s change of management was that fundamental science was not a commercial sphere, and should be supported by the government, Gorsky has said earlier.

But the new administration has put pressure on physicists to secure deals with commercial companies while slashing scientists’ salaries and paying huge compensation packages to administrative officials, Gorsky said.

Gorsky was among the most vocal critics of the reform, saying in media interviews that the new policies also fettered research with reams of red tape, blocked international contact between academics and forced physicists to jump through bureaucratic hoops instead of focusing on their work.

This is not the first time a dissenting voice has been punished at the institute: Last June, ITEP demoted its deputy research director, Mikhail Danilov, after what his colleagues said was a series of run-ins with the institute’s new administration over its policies.

Another physicist at ITEP said that he was expecting to be dismissed any day now, and Gorsky and other protesters spoke about having faced months of pressure to resign.

When called by The Moscow Times on his cell phone Thursday, ITEP’s recently appointed director Yury Kozlov said: «I have no comment,» and hung up.

«First they create unfathomable conditions for work — there is no high-speed Internet, business trips are prohibited,» physicist Andrei Rostovtsev said in an interview. «And then they fire people for truancy.»

Applications for travel to international scientific conferences have been rejected, physicists said, even when the trips were to be financed from outside sources, such as Gorsky’s visit to Stony Brook, which was to be paid for by his research grant and by the host university.

ITEP’s new deputy director for research Alexander Golubev — who has replaced the demoted Danilov — rejected the travel application «at the very last moment» by putting forth the demands for a cooperation deal and security clearance, Gorsky said.

The requirements were «absolutely insane,» he said.

Another veteran ITEP research scientist, speaking on condition of anonymity for fear of also losing his job, attributed the new policies to an «ongoing overall bureaucratization of everything in the country, including science.»

Others suggested that monetary considerations may also be involved.

Last year, President Vladimir Putin signed into law a controversial reform of the Academy of Sciences that affiliates the country’s main scientific research institutions. An earlier version of the bill that would have abolished the academy entirely was reworked after vehement opposition from the scientific community